Amboseli National Park Kenya is a beautiful destination to visit. The park covers an area of 392 sq km and has a wide range of wild animals to view.

Amboseli National Park Kenya is situated at the foot of Africa’s highest mountain; Mt. Kilimanjaro.  The park is situated in Loitoktok District, Rift Valley Province of Kenya. Mount Kilimanjaro can visibly be viewed from Amboseli. The park’s natural environment is vastly savannah grassland stretching across the Kenya Tanzania border. The park is well known for being one of the finest places in Africa to get close to free-ranging elephants among other wildlife species. 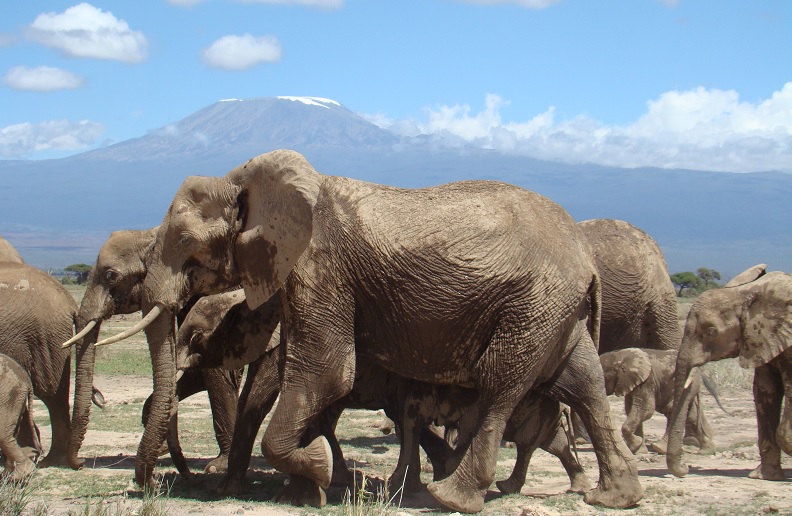 Amboseli National Park covers only 392 sq km but despite its small size and its fragile ecosystem, it supports a wide range of mammals and over 400 bird species. The park has an extraordinary array of wildlife and the contrast between the arid areas of the dry-lake bed and the oasis of the swamps.

Amboseli offers some of the best opportunities to see African animals because its vegetation is sparse due to the long dry season. Amboseli National Park is the natural habitat for many wild animals such as the buffalo, giraffe, African elephant, lion, impala, hyena, cheetah, and zebra among other African wild animals.

The park is can be accessed through road or air. The main road leading into the park is from Nairobi via Namanga which is about 240 km on the Nairobi – Arusha Road, passing through Meshanani Gate. One can also use the road from Nairobi via Emali which is about 228 km on the Nairobi – Mombasa Road. Also, access from Mombasa is mainly through Tsavo West National Park via Kimana Gate.

The area is also home to the Masai people, but people from other parts of the country have settled here attracted by the successful tourist-driven economy and intensive agriculture along with the system of swamps that makes this low-rainfall area one of the best wildlife-viewing experiences in the world with 400 species of birds including pelicans, water birds, hammerkops, kingfishers and crakes.

Accommodation in Amboseli is available in the form of luxury safari lodges or Camps, Mid Lodges, Budget lodges, and camps that will cater for all travelers’ needs who are out to explore the park on game drives, guided nature walks, or on special interests such as photography or bird watching

Where Is Amboseli National Park Located

Amboseli National Park is located in Loitoktok District. It is located about 240km from Nairobi.

The park is open and accessible throughout the year. The best time to view abundant wildlife is during the month of June to October (Dry Season). This is the time the animals flock to the marshes, lakes, and other water bodies.

Why Travel With Us